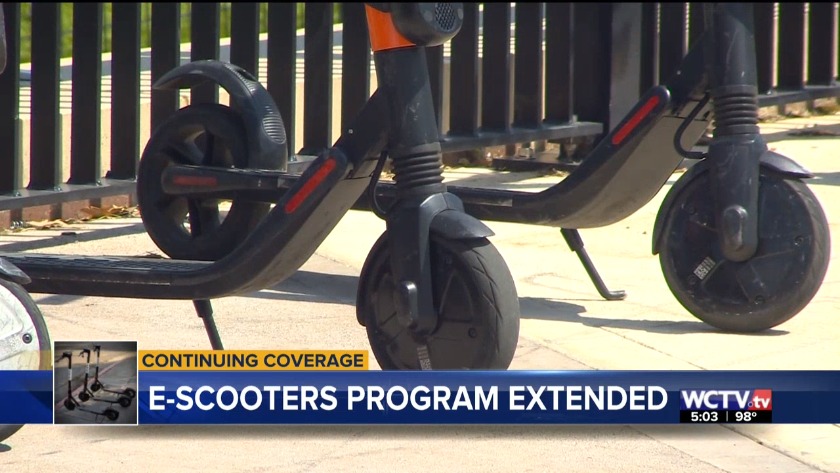 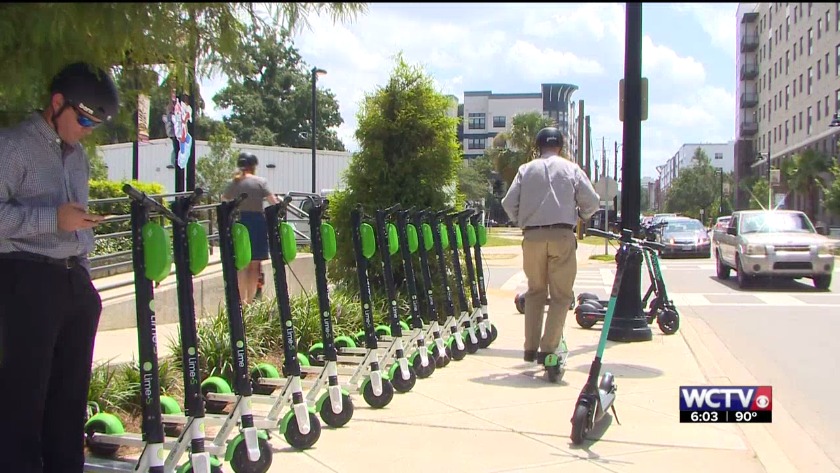 "Hopefully by then we will have worked out all of the issues, one was brought up last night about the liability, if they're left on somebody's personal property and there's an injury, who's liable? So that's one of the other issues now that we've got to work through," said Commissioner Curtis Richardson.

Richardson said City Staff did not feel as though they had enough information about the program to decide whether scooters should remain permanently, and requested more time.

"We wanted to extend the pilot because we started during a time when there weren't as many people in town, the students hadn't come back yet, and so we want to get a true picture of what the impact is going to be," said Richardson.

The new program may actually mean more scooters in Tallahassee; the "Gotcha " company has not been operating in the City due to geofencing issues, and informed the City Commission that it would not be seeking to be part of the extended pilot..

That opens up the door for a brand new scooter company; that fifth vendor would have to pay the $25,000 that the other four already have. (Those four will not have to pay an additional fee to remain in Tallahassee.) The fifth company does not have to be on the original list recommended by City Staff.

The City hopes to have the decision about the final vendor made within the next month to month and a half.

TALLAHASSEE, Fla. (WCTV) -- The City of Tallahassee is considering extending the pilot program of e-scooters for six more months, motoring on through a new end date of March 15.

The pilot was originally supposed to end on October 15, but City Staff is hoping to collect more data.

Julie Conn Christesen, a principal planner with the City of Tallahassee and Leon County, said the extension would allow the City to study the program during cooler weather, the legislative session, and football season.

The current statistics are from the last eight weeks.

"We've had over 60,000 rides between all of the vendors," said Christensen. "Another number that caught my eye was that there's been about 28,000 unique riders; some may have download multiple apps, but I still thought that was interesting."

Consumers around Tallahassee also weighed in on the e-scooters.

"I loved it! Oh my god, me and my husband tried them one night outside our apartment, we were like, let's just try it!" said Larkeycia Johnson.

Johnson said she and her husband enjoyed the rides, and would definitely try again.

Keisha McQueen was walking her 7-year-old dog Charlie through Cascades Park, when WCTV asked her about her feelings on the e-scooters.

She hadn't tried them, but said she enjoyed seeing people having fun on the scooters, and they haven't impacted her walks with Charlie.

"They're having a good time. They're being safe, and they're being respectful of everyone's space," said McQueen.

Although she hasn't given the scooters a shot, she said she might try soon; FAMU sophomore Jaelle Gilot felt the same way.

"It will get cooler, so people will probably be more willing to want to ride a scooter and be outside," said Gilot.

Gilot wants the pilot program to continue, so that she can have time to try the scooters.

"I don't think I would use it to get somewhere, but rather for fun. Like through Cascades Park," said Gilot.

The City has seen some issues in the pilot, including speeds in Cascades Park specifically.

"We slowed the speed from 15 to 6 miles per hour in Cascades after hearing from citizens," said Christesen.

Other issues that have been addressed include scooters blocking sidewalks, geofence issues and scooters being towed.

City Staff has requested that scooter vendors issue alerts, requesting riders keep scooters on the pavement and not on any grass in City parks.

Due to issues with geofencing, some companies have voluntarily pulled their scooters off the streets until the issues were resolved; others were asked by the City to pull scooters. Rather than the 1,000 scooters allowed, City Staff estimates the average number of scooters on the streets in the past eight weeks has been between 600 and 800.

The average scooter ride is 18 minutes, with an average distance traveled of 1.36 miles. The most common ridership areas include Collegetown, Cascades Park, and Downtown.

Some businesses in Railroad Square are also riding the scooter high, enjoying the increased traffic in the area.

"We get people that realize they can get an e-scooter from Cascades Park and travel down FAMU Way or Cascades Trail right to us!" said Lillian Finn, the manager of Railroad Square.

Kayla Pickron, an FSU student and salesperson at "The Other Side Vintage," agreed, saying the e-scooters help people find Railroad Square easily.

However, the area presents a unique challenge for scooters, with the lack of center lines on the road.

"We don't have sidewalks persay, around here, so that they can easily get around the cars," explained Pickron.

Some scooters ride down the middle of the street, not realizing cars use it as well.

"Please use common sense safety, please go along the side of the road, and please, please wear a helmet," urged Finn.

The scooter extension offers the possibility of other mobility devices arriving in Tallahassee as well, including e-bikes, or even tricycles.

"That's a good idea because some people, they can't stand on scooters, and they're just not able to coordinate, they're better with tricycles, or bikes," said Pickron.

Johnson said bikes would be helpful for parents who could put a child's seat on the back, rather than trying to use a scooter.

The Tallahassee City Commission is taking up the issue next Wednesday, September 25.

If the City Commission votes to extend the program for six additional months, it would remain a pilot with a set end date; it does not mean that scooters are automatically here to stay.

City Staff does have recommendations if the scooters extend beyond the life of the pilot program.

In the agenda item, Staff requests that the City limit the number of companies who stay in Tallahassee, citing time constraints with contacting multiple vendors for issues, and citizen confusion in distinguishing among different vendors.