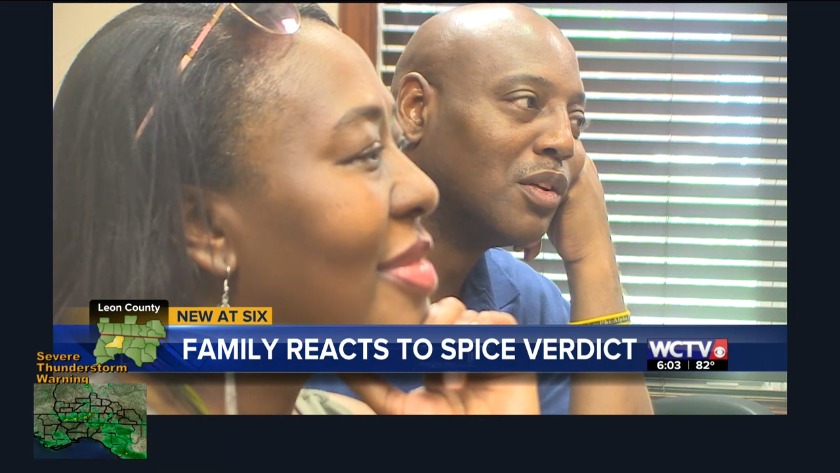 Family of victims speak after trial of triple-deadly crash ends 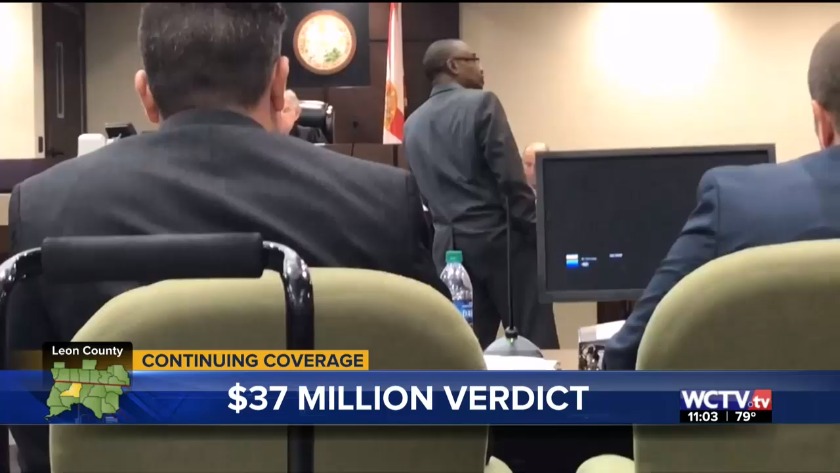 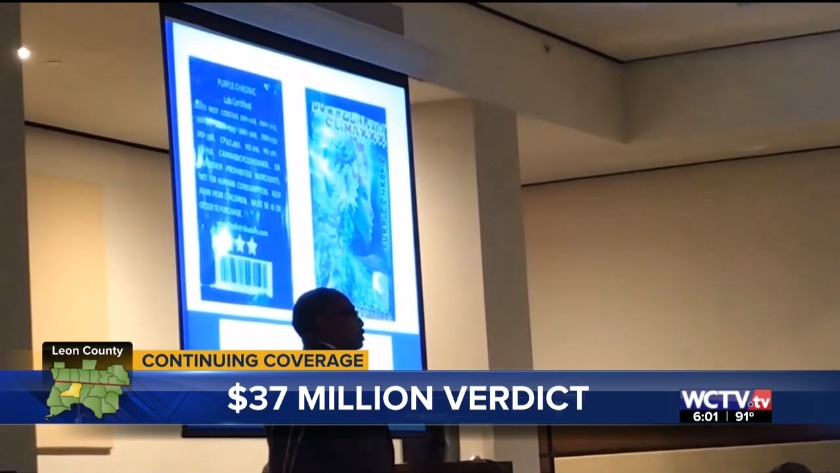 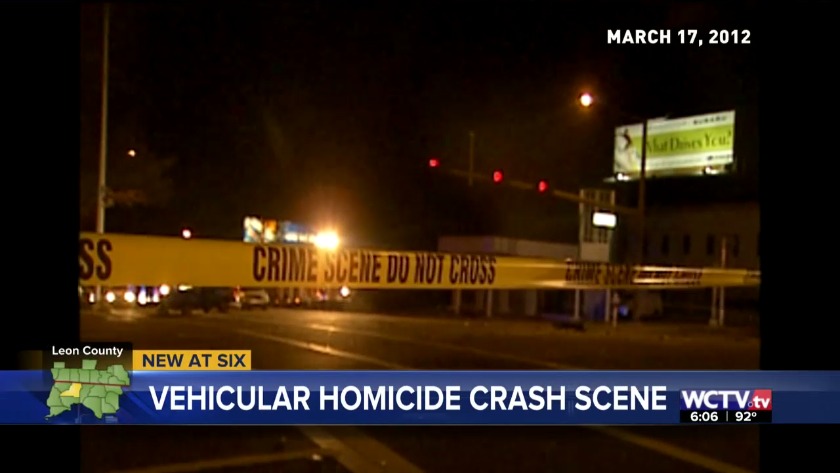 At the heart of the case was a packet of purple chronic; both what's on it and what's in it.

The jury awarded the the Vickers and Biggins families a whopping $37 million in damages in the deaths of Shakelia Vickers, her 10-year-old son Vincent Vickers and his best friend, 10-year-old Tyler Biggins.

We broke the story Thursday and on Friday we had a chance to talk with Biggins family.

They're hoping the verdict sends a message to those who make spice and those who decide to smoke it.

"Sad. Disbelief. And at the same time, I got happy because there's a weight off my shoulders now," Marvin Biggins said, "And we can try to move on from this tragedy that affected both of our families."

There are many mixed emotions for Tracey and Marvin Biggins one day after a jury found a spice maker liable in the death of their 10 year old son Tyler and awarded them a share of a $37 million judgement.

"No money can replace my son," Marvin Biggins said. "I cherished him from the day he was born until his death."

"It's not about that," Tracey Biggins said of the jury award. "It doesn't bring Tyler back."

The Biggins and Vickers families sued the Texas based DZE Corporation soon after the driver that plowed into the Vickers' car admitted he was high on the spice "Down2Earth Climaxxx Purple Chronic."

"They needed to be held accountable for what they were doing and the part they played in it, which was a major role," Tracey Biggins said.

DZE's manager took the stand this week and claimed he'd only heard rumors that people were smoking the scented potpourri. He testified the company didn't feel the need to put warnings on these packets because they were clearly labelled "not for human consumption."

The jury decided that wasn't enough.

"The public did not which substances, including the chemicals that are actually placed in it," family attorney Roosevelt Randolph said. "So I think when they (the jury) found out that, and that this substance was actually made in a five gallon bucket, I think that was a major problem."

Family attorney Roosevelt Randolph says court cases and wins like this against spice manufacturers are rare. He hopes this case sets a precedent for holding spice companies accountable.

"We hope this verdict can help other companies do the right thing," Marvin Biggins said.

We did reach out to attorneys for the DZE Corporation who were here in Tallahassee arguing the case, but we have not yet heard back.

A jury awarded the Vickers and Biggins families $37 million in damages on Thursday, saying the DZE corporation failed to put adequate warnings on its spice packets of DOWN2EARTH Climaxxx.

Christoper Generoso was high on that brand of spice when he crashed into the Vickers' car on St. Patrick's Day 2012, killing Shakelia Vickers, her 10-year-old son Vincent Vickers and his best friend, 10-year-old Tyler Biggins.

The jury deliberated for about three hours Thursday before announcing its verdict.

Parks said the next steps will be to hold the DZE Corporation accountable for what they owe the family and said they also have counsel in Texas to make sure the company pays up.

TALLAHASSEE, Fla. (WCTV) -- A DZE Corporation manager took the stand Tuesday morning. His Texas-based company is being sued in the wake of a triple fatal wreck in Tallahassee.

Attorney Roosevelt Randolph asked why he approved the name "Purple Chronic." Baba said it had to do with the product's grape aroma and denied calling it chronic to mimic the slang term for marijuana.

Family attorneys hammered Baba during more than an hour of testimony. They asked - if the spice weren't meant for smoking - why was DZE selling the packets to tobacco and smoke shops, instead of stores like Wal Mart and Bed Bath and Beyond that sell scented potpourri.

"We heard rumors that people were consuming it," Baba said.

Family attorneys tried to get a portion of a federal court transcript read to the jury. They said in that transcript, Baba acknowledged using the internet to market and sell controlled substances - including synthetic marijuana - for human consumption.

Testimony in the product liability trial is expected to continue Wednesday.

A civil suit targeting a spice manufacturer in the wake of a triple fatal crash is now in its second day.

The Vickers and Biggins families are suing the DZE Corporation for making and selling the spice that Christopher Generoso smoked before crashing into the Vickers' car.

Shakelia Vickers, her son Vincent Vickers and his friend Tyler Biggins were all killed in the crash at the corner of Tennessee and Monroe Streets in March 2012.

A former employee at Bill's Mini Mart testified in a deposition that he received boxes of Down2Earth spice. Each box included 1500 packs at a cost of five dollars each.

The deposition of Baha Kasem said employees would put the packs at customers eye level right above the cigarette rack.

The deposition indicates employees heard about both state and federal bans on certain synthetic drugs on the news. Kasem said at some point employees asked whether the product they were selling was legal and a representative from the DZE Corporation assured them they had changed the chemicals and even moved to a new state to make sure "it's all legal."

Kasem described going to a building in Pensacola to pick up the spice. He says he was never allowed past the door, but knew they were making the spice there because it had a strong aroma.

He also said he and other employees would go to the "Down2Earth" web site to check on the hottest selling flavors.

He said Bills Mini Mart stopped selling the spice after it became illegal.

TALLAHASSEE, Fla. (WCTV) -- Two Tallahassee families are now taking a spice manufacturer to court after an impaired driver plowed into a car and killed three people.

Testimony started Monday in a civil suit against the Texas-based
DZE Corporation.

That lawsuit was filed by the sole survivor of the crash, Vincent Vickers, who lost his wife and son in the crash as well as the Biggins family who lost their son.

The crash happened on St. Patrick's Day 2012. Shakelia Vickers, 10-year-old Vincent Vickers and his 10-year-old friend Tyler Biggins were all killed when a car crashed into them at the intersection of Monroe and Tennessee Streets.

Christopher Generoso admitted he was high on spice at the time and is now serving 22 years in prison for vehicular homicide and reckless driving.

In Monday's opening statements, the family attorneys say several packets of "Down to Earth Climaxxx Purple Chronic" were found in Generoso's car after the crash. They contend the spice inside contained a federally banned substance called AM-2201.

"If not for AM-2201 this accident would not have happened," family attorney Roosevelt Randolph said. He pointed out the packet had no information about the ingredients inside and no warning beyond, "Not for human consumption."

He contends DZE manufactured the product and knew all along that people were smoking it. "Why was this product still out there?" Randolph asked in his opening statements.

The attorney for DZE Corporation, Anthony Manganiello, called the accident, "A horrible tragedy."

"The party responsible must pay," Manganiello said, but he contends that's driver Christopher Generoso, not the DZE Corporation.

"Christopher Generoso caused it when he decided to drive while intoxicated that night," Manganiello said. "You don't sue Budweiser when someone drinks and drives and causes an accident."

The first witness on the stand was an emergency room nurse who took a legal blood draw from Christopher Generoso the night of the crash. He testified that Generoso was just waking up and he had to tell him what happened. "He was horrified," the nurse testified.

The next witness was a forensic toxicologist with the FBI. He testified that he found no drugs or alcohol in Generoso's blood besides the synthetic cannabinoid AM-2201. The toxicologist said he could not comment on the amount of AM-2201 in Generoso's system or what effects it may have had on him.

There are seven jurors considering the product liability claims. They'll be asked to make a decision on any liability and any damages by the end of the week. It's not clear yet whether Generoso will be called as a witness in the civil case.