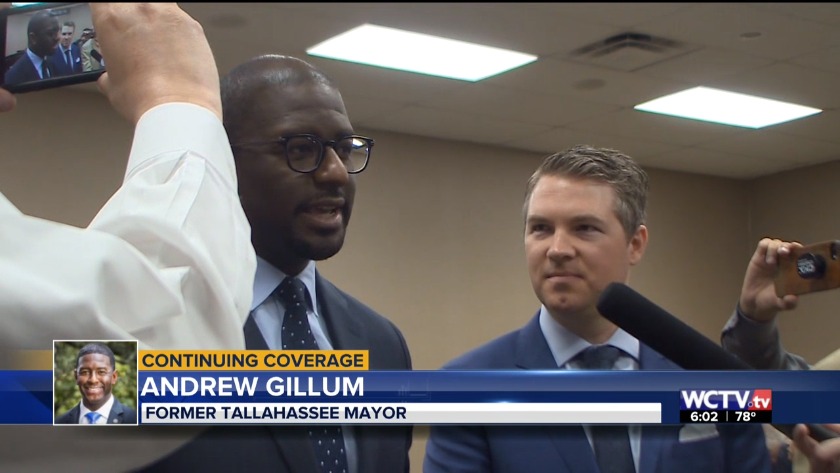 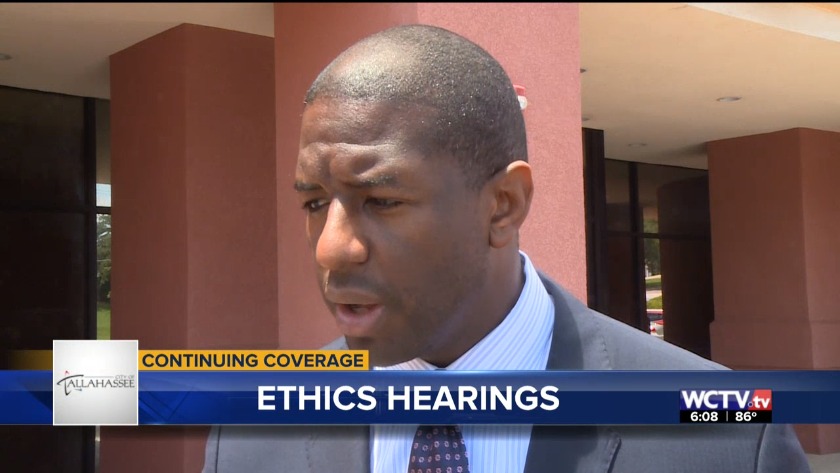 TALLAHASSEE, Fla. (WCTV) -- A settlement has been reached in the ethics case against former Tallahassee Mayor Andrew Gillum.

Four of the five charges against Gillum were dismissed. The fifth, that he received a gift he reasonably knew was in excess of $100, he accepted as part of the settlement.

The hearing was scheduled for 9:30 a.m. Wednesday morning before Judge E. Gary Early.

No witnesses testified in the courtroom.

"Our attorney came prepared today to very vigorously defend what I have said all along," said Gillum.

After two hours of discussion, Gillum's attorney and the Florida Commission on Ethics advocates and investigators did come to an agreement.

"The charge that the mayor had accepted a gift that he reasonably knew was in excess of $100, that's the one that's been agreed to," said Gillum's attorney Barry Richard. "It doesn't specify which one it is, but from Mayor Gillum's standpoint, it was the boat ride around the Statue of Liberty."

The boat ride is shown in a picture WCTV obtained, which includes Andrew Gillum, his friend and lobbyist Adam Corey and a man they later learned was an undercover FBI agent.

Richard said it did not occur to Gillum that one of his friends on the boat ride, Adam Corey, was also a lobbyist, and that Gillum should not have accepted gifts from him.

"As any adult, when you learn more information, you have to step up and you take responsibility for what you come to know," said Gillum.

The New York City trip, with a boat ride and "Hamilton" tickets, was not the only trip under investigation. Gillum and his wife went to Costa Rica with Adam Corey as well.

"He didn't do anything wrong in Costa Rica. At all," said Gillum's attorney.

In documents provided to the Florida Commission on Ethics, Adam Corey claimed to have bought a $98 lunch for Gillum on May 4 in Costa Rica.

However, when Richard subpoenaed Corey's credit card records for May of 2016, he found that receipt dated May 2. Gillum and his wife did not arrive in the country until May 4.

"These are the types of things, and not the only ones, that I believe if the commission had known about at the time, they probably would not have found probable cause," said Richard. "That's one of the reasons we have a settlement today."

Richard also explained why Gillum could not have been in a hotel room paid for by FBI Agent "Mike Miller," based on Google maps and cell phone
data.

Someone entered that hotel room, one of five that had been reserved, around 4:00 a.m., but Richard said he could prove that person was not Gillum, through a text message to Adam Corey about meeting for breakfast.

Richard said they do not know who entered that hotel room.

Gillum is ready to move on.

"I am more than excited now to move on to the work that we have got for ourselves, and that is, we've got to get a million new voters registered around Florida," said Gillum. "I am going to move very swiftly to get to that work soon."

Gillum has agreed to pay a $5,000 fine as part of the settlement, which is up for review by the Florida Commission on Ethics.

Describing the experience, he said it took "a lot of time and energy from my wife, myself, and our family."

Many in the courtroom wondered how this affected Gillum's run for governor.

To that effect, he said, "It didn't make it any easier."

The final hearing was initially scheduled to begin at 9:30 a.m. Wednesday, but was delayed as the Commission on Ethics discussed a possible settlement.

It was announced shortly before 11:40 a.m. that both parties had reached an agreement.

Four of five charges against Gillum were ultimately dismissed. Gillum admitted to taking a boat ride in the New York Harbor that should have been reported. He will pay a $5,000 fine for the violation, subject to the Commission on Ethics' approval.

Monica Casey followed the developments from the hearing this morning:

Commission on Ethics have entered into “amicable settlement agreement.” #GillumEthicsHearing

11:32: all attorneys + Gillum back in the courtroom #GillumEthicsHearing

11:07: Keith Powell, an investigator with the Florida Commission on Ethics, says it will be 15 more minutes #GillumEthicsHearing

11:02. Still no movement in the courtroom #GillumEthicsHearing

Judge Gary Early just entered the courtroom, saying the hearing is now delayed till 11:00, as both parties are having “discussions” #GillumEthicsHearing

10:15, still no members of either side in the courtroom #GillumEthicsHearing

Gillum ethics hearing delayed till 10:00am

The City's Independent Ethics Commission has recommended changes that will come before the city, but Wednesday night's focus is ordinances the city itself has created.

"Giving the public the opportunity to speak at the beginning of the meeting on every single agenda item, and at the end of the meeting," said Mayor Dailey.

Mayor Dailey detailed what the city has done so far to increase transparency, including a new portal on the website.

Integrity Florida's Ben Wilcox said, "It's a step in the right direction."

He explained city employees need to know what the rules are.

"I think it's a step the city needs to take to prevent any further activity like we've seen in the previous administration," said Wilcox.

Part of the investigation surrounding former Mayor Andrew Gillum has centered on accusations that he received gifts.

"The Florida Commission on Ethics has found probable cause that Gillum has violated Florida's ethics laws," said Wilcox.

"The state of Florida has a no gift policy, and I'm interested in implementing the same," he said.

Regarding Wednesday's final hearing for former Mayor Gillum, Wilcox had some predictions.

"There will be a number of witnesses, trial could last a couple of days," he said. "It could be a couple of weeks before the law judge makes that determination about ethics law violations."

Gillum's hearing is set to begin at 9:30 a.m. Wednesday morning.

Earlier on Tuesday, the judge ruled in favor of the prosecution, allowing them to call Gillum's brother as a witness.

If Gillum is found guilty, the case will go back to the Florida Commission on Ethics for them to recommend censure or fines.