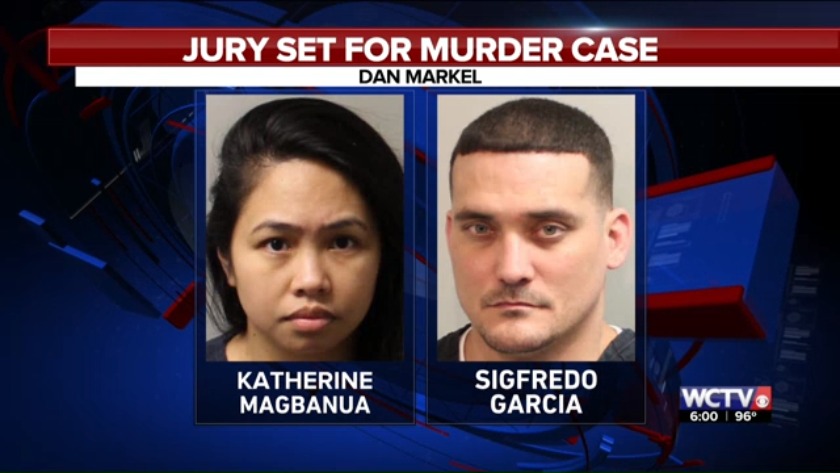 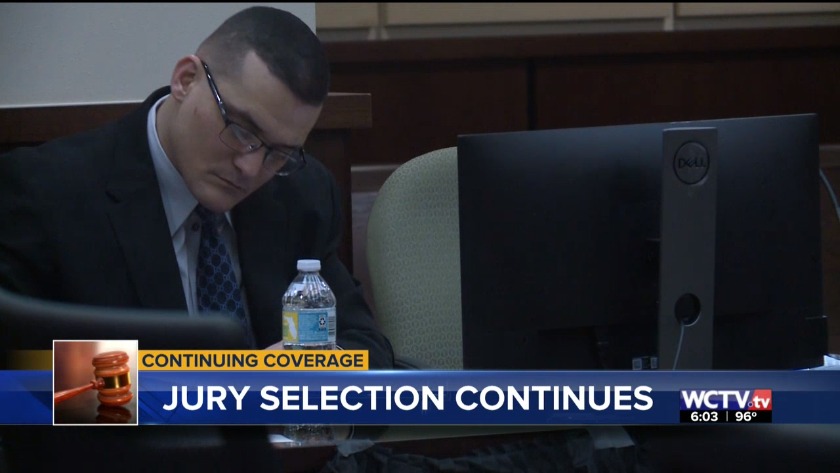 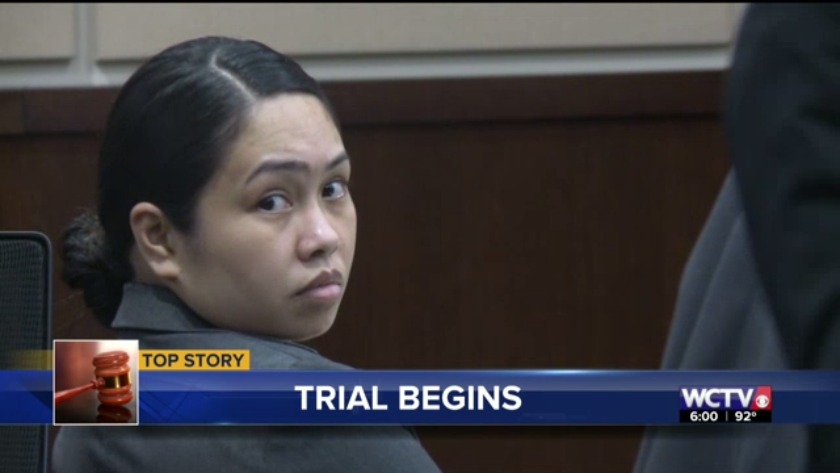 TALLAHASSEE, Fla. (WCTV) -- It took just three days to seat the 12-member jury for the Dan Markel murder case. The popular Florida State University law professor was gunned down at his Tallahassee home in Betton Hills in July 2014.

Sigfredo Garcia and Katherine Magbanua are accused in the murder-for-hire plot. Garcia faces the death penalty. Magbanua faces life behind bars. They are being tried separately, but at the same time.

"If you all would stand and face the clerk and be sworn in please," said Circuit Judge James Hankinson after the jury was selected late Wednesday afternoon.

Twelve women and two men were chosen to serve on the jury, breaking down to 12 jurors and two alternates. They will not be sequestered.

"It was a lot quicker than I expected," Garcia's attorney Saam Zangeneh told WCTV.

The jury pool was whittled down from more than 700 people that were summoned. Those who went through the voir dire process were questioned thoroughly by both defense teams and the states prosecuting attorney.

"Do you feel confident that you'll be able to set aside any concerns or thoughts you have about the penalty phase?" asked prosecutor Georgia Cappleman during the process.

"Does everyone understand that they are here, but they're not together?They're separate and apart. Does everybody get that?" asked Magbanua’s attorney Chris DeCoste.

She is also being represented by Tara Kawas.

All of the alleged evidence against Garcia and Magbanua will be brought to light over the next month.

A representative for the Markel family released the following statement to WCTV.

"As the long-awaited trial of two of Dan’s alleged killers begins, the Markels appreciate the love and support they have received from the Tallahassee community and across the world. They continue to be grateful for the efforts of law enforcement and are hopeful that, in the end, all those responsible for Dan’s murder will be brought to justice."

Zangeneh said they are looking forward to telling their side of the story as well.

The highly anticipated trial has been five years in the making. The murder has been covered on the national level by CBS News's 48 Hours and other high-profile news magazines.

Jurors have been asked to report to the courthouse by 8:45 Thursday morning. Opening arguments will start soon afterward.

WCTV will be live-streaming the proceedings online and will also have continuing team coverage throughout the duration of the trial during on-air newscasts.

Continue reading to view the full updates from the last three days of jury selection.


After three full days of questioning, a jury has been selected in the Dan Markel murder case.

Twelve jurors and two alternates were selected for the case. The jury entering the trial is predominantly female.

Opening arguments in the high-profile murder trial will begin on Thursday.

In a statement to WCTV, Orin Snyder, the attorney for the Markel family, said this on the eve of the trial beginning.

"As the long-awaited trial of two of Dan’s alleged killers begins, the Markels appreciate the love and support they have received from the Tallahassee community and across the world. They continue to be grateful for the efforts of law enforcement and are hopeful that, in the end, all those responsible for Dan’s murder will be brought to justice."

Progress is slow, yet steady, in choosing a jury in the Dan Markel murder case.

That leaves 12 potential jurors in the jury box and 70 more in the courtroom.

Attorneys will start another round of questioning at 1:15 p.m.

None of the jurors has been selected at this point.


Defense attorneys are now questioning jurors extensively about their views on the death penalty.

Saam Zangeneh represents Sigfredo Garcia, who is facing the death penalty if convicted.

Zangeneh is asking the pro-death penalty jurors about whether the state’s decision to seek the death penalty would influence them in reaching a verdict.

“They don’t have to seek the death penalty, but they are,” Zangeneh said.

He pressed one juror about whether his religious beliefs would preclude him from considering the death penalty and another juror who said she would find it difficult to convict someone knowing they could ultimately face the death penalty.

Zangeneh also reminded jurors that both defendants have a right to remain silent.

“If you heard from one and not the other, would you hold it against the person who didn’t testify?” He asked the potential jurors.

One juror asked if one is implicating the other. “I don’t know,” Zangeneh said.

One woman said if she hears from one defendant, she would want to hear from the other defendant.


Jury selection in the Dan Markel murder case is now in its third day.

The jury box and courtroom are once again filled with prospective jurors, and attorneys are about to begin in-depth questioning.

Tuesday’s questioning ranged from the death penalty to conspiracy to divorce.

Right now, there are 79 potential jurors who are still under consideration and 150 more who have been summoned just in case.

Jury selection enters day 3. We could have a jury by the end of the day in Dan Markel murder case @WCTV pic.twitter.com/z7nSUjR2oO

“Why are they being tried together?” one potential juror asked.

The judge explained that was his decision.

“I’m viewing this as one case,” another juror said.

It’s clear there is some concern or confusion among the potential jurors about the joint trial.

Several prospective jurors spoke in favor of the death penalty, and several others said they could not vote for it under any circumstances.

“So basically we have these people’s lives in our hands? That’s a huge deal,” one juror said about the death penalty on the table.

The judge asked all the jurors to step outside the courtroom around 10 a.m.

The judge is hoping to begin testimony in the trial on Thursday.

Jury selection in the Dan Markel murder trial will stretch into a third day.

Potential jurors answered In-depth questions about everything from the death penalty to gangs as they sat in the jury box Tuesday afternoon.

Of those 21 people in the jury box, only seven remain.

They are now among a pool of 79 who are still in the running to serve on the jury.

The questioning will continue Wednesday morning as attorneys try to seat a jury of 12 and three alternates to hear the month-long murder case.

93 potential jurors are now being questioned in depth as attorneys try to seat a jury in the trial of Sigfredo Garcia and Katherine Magbanua.

The two are accused of killing FSU law professor Dan Markel in 2014.

The judge began by asking jurors if they have strong feelings about the death penalty.

Now, they are discussing prior jury service, whether they know any of the attorneys or witnesses in the case and whether they have ever been the victim of a crime.


Prospective jurors are now being questioned privately about the media coverage they have seen and any hardships they would face if chosen to serve on a jury for the next month.

Several said they “knew quite a bit” or a “great deal” about the Dan Markel murder case. A few said they thought Sigfredo Garcia and Katherine Magbanua were guilty as charged.

Some described watching stories on the news, listening to a popular pod cast, discussing it with friends and even chatting about it at their kid’s ballgame.

One potential juror said “That’s the hot seat,” as he took a seat at the table. He was excused after mentioning a family member was in Dan Markel’s class at the FSU Law School.

“Most of us were rattled,” he said.

Quite a few of the potential jurors said they had heard of the Markel murder, but didn’t know much about the case and had only seen news reports in passing.

Most of the discussions lasted five minutes or less and potential jurors were either excused right away or told to come back at 1 p.m. Tuesday for more questioning.


A second day of jury selection is now underway in the Dan Markel murder case.

50 more prospective jurors reported to court Tuesday morning. 100 jurors were questioned Monday and 150 more have already been summoned to report this week.

Right now, potential jurors are being questioned only about media coverage and any hardships they may face serving for four weeks. That is happening behind closed doors. General questioning is expected to start Tuesday afternoon.


Potential jurors are now being questioned behind closed doors about any media coverage they’ve seen on the Dan Markel murder case.

One called it a “contract killing” and another said he was “locked in” on his opinion of their guilt. Both were excused.

Some said they knew “bits and pieces,” others “very little,” but on the flip side there were potential jurors who mentioned the popular podcast and others who mentioned Markel’s in-laws.

These conversations are taking place privately in the jury room around a large table. The judge is at one end, the potential juror at the other and the attorneys and defendants are on either side.

Many of those questioned were willing to serve but were worried a month off work would affect their ability to pay their bills.

When asked who has heard about the case and who has a hardship serving for a month, about half stood up @WCTV

This questioning is expected to go on throughout the day Monday and into Tuesday morning. The judge is hoping they can go on to general voir dire questioning by Tuesday afternoon. That will depend on how many potential jurors remain after discussing media exposure and scheduling and financial hardships.

The first 50 potential jurors are now in Courtroom 3G as the murder trial of Sigfredo Garcia and Katherine Magbanua begins.

Garcia and Magbanua stood and faced the jurors as they filed into the courtroom.

A total of 750 jurors have been summoned. At least 300 could be called to the courthouse this week.

Attorneys are trying to find 12 jurors and at least three alternates to hear evidence in the case which could be complicated given it’s a high profile case with intense media coverage and the death penalty in play for Garcia if he’s convicted.

Jurors will be asked about any media coverage they’ve seen privately in a separate room as prosecutors, defense attorneys and the defendants themselves listen in.

The judge says he’ll ask potential jurors what they’ve seen or heard, what their source of information is and whether they have formed any opinions on the defendants’ guilt or innocence.

The judge telling jurors the trial could last up to four weeks, but the jury will not be sequestered during the trial.