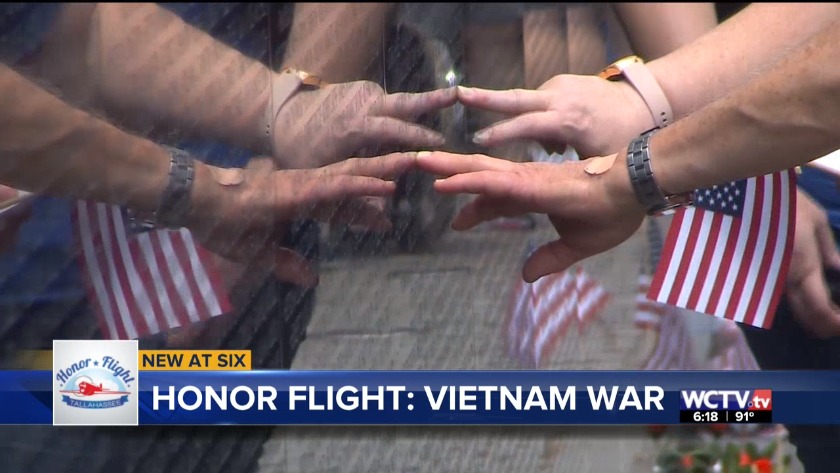 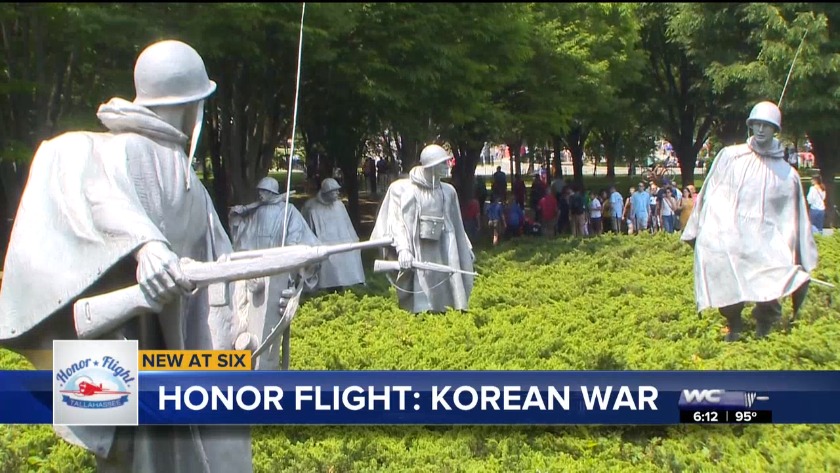 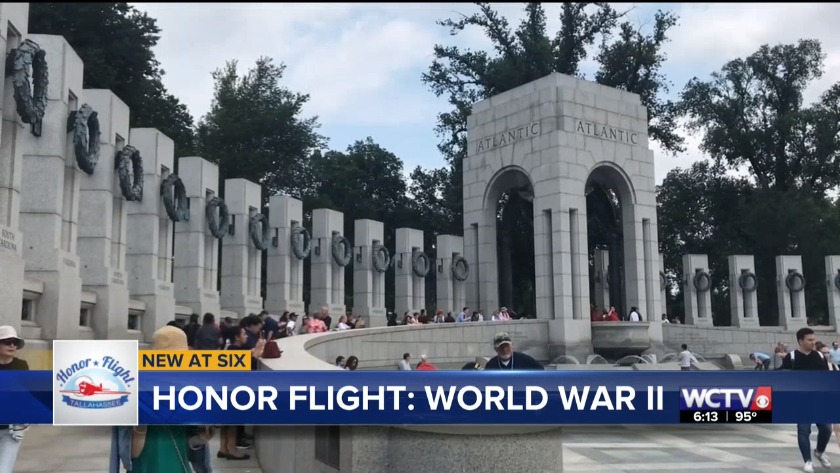 The majority of veterans on this flight fought in Vietnam. We joined them as they reflected on the black granite walls of the Vietnam Memorial.

"Right here ... right here," Vietnam Veteran Howard Williams said as he pointed to his cousin’s name etched onto the wall.

"James Sheffield ... and he's from Tallahassee?"

"It's just a good feeling to finally come here and get to have a peace of seeing his name honored for doing the ultimate sacrifice at 18 years old," Williams said.

"It's kind of a bittersweet thing, huh?"

"It is. It is because he used to carry me on his shoulders like I was his little brother," Williams said.

"It takes my heart and I'm talking to you while I'm looking at all these faces on this wall, because behind every name is a face and a family," Vietnam Veteran Lewis Wilson said as he fought back tears.

“They sat in a foxhole and prayed to God, please let this be over. When can I go home?" Lewis said. Lewis ran his hand over the names on the wall, shook his head and turned away.

Lewis was accompanied by Tallahassee Mayor John Dailey, who served as his volunteer guardian on the trip.

"You weren't even born yet when this happened?"

"You still have a lump in your throat."

"Yeah. Especially when you're walking the wall with the men and women who did serve,” Dailey said. “It's real powerful."

"The Viet Cong would shoot rockets across the bay every night,” Vietnam Veteran Clarence Sikes recalled. He got choked up as he described serving two years in the Army there. “So it was kind of hard, but, you know, I made it through."

"I look here and I look all the way at all these brothers who lost their lives,” Sikes said as he walked along the wall, “and you got people who don't even appreciate it. That's the hurtin'est part about it."

"It really brings back some heavy memories,” Vietnam Veteran Phillip Worley said, “but it brings closure a lot to be able to come to the wall and feel the name and let it absorb though your system.”

Worley stopped and put both his hands on the granite wall and bowed his head.

Hundreds of people, some waving flags, greeted the veterans when they returned to the Tallahassee International Airport later that night.

The thank you’s and the homecoming having quite an impact on Vietnam vets, who say they did not get a warm welcome after the war.

"Last time we nearly almost had to sneak back home, but this time, it was great,” Vietnam Veteran Kilmer White said. “Really like something I've never seen."

“When I came home in ‘71, even the taxi driver didn't want to give us a ride. This makes up for that and then some," Vietnam Veteran Darryl Stewart said of the Honor Flight and spirited homecoming.

The Korean War Memorial, with its seven foot statues of men wading through rice paddies, was our second stop.

"Well, I can just see myself among those guys," Korean War veteran Lawrence McCuthin said as he looked out over the field of steel statues. "I remember all of this ... and lots more."

"It reminds me of how I was able to come out and a lot of my friends didn't. That bothered me for a long time," the U.S. Army veteran said.

McCuthin described coming under fire as trucks tried to deliver turkey dinners to the troops on Thanksgiving. "I had bullets to bounce off my helmet," he said.

"I can't put no words on it," Vietnam veteran Jack Torbett said upon seeing the Korean War memorial. "It's just unbelievable all of this is here," he said.

"That one right there," Vietnam veteran Ernest McNeill said as he pointed out an etching on the Korean War Memorial's mural wall.

''What's going through your heart and mind right now as you see this?"

"Well, I don't know ... seeing these things... my father served in Korea and World War II so it's significant to me, and of course when I go around to the Vietnam Memorial ... it's a tough time," McNeill said.

"Listen, let me tell you something. Don't mind me if I get a little emotional," Korean War veteran Les Roberson said as he arrived at the memorial. "I try not to but ... it's too much."

"I'm overwhelmed. That's the only way I can put it. Brings back a lot of memories. That's all I can say," Roberson said. "I knew it would be a bittersweet day, but I wouldn't take a million dollars for this today. It's just awesome."

Our first stop was the World War II Memorial.

"I landed in Marseille, France and ended up in Innsbruck, Austria toting a 52 pound mortar," World War II veteran Luther Ausburn reminisced as he toured the memorial for the first time.

"I've been to Washington before, but I have never been around none of this," the 93-year-old Army vet said. "It's nice."

"Knowing that he actually served in World War II, it's really touching to be here and to see the amazement of this," his son Jimmy Ausburn said, "and being here with him is super special."

"I went in to Normandy and went through ... went until the war was over in Germany," World War II veteran Samuel Guthrie said.

"You went in at Normandy?"

"I went in about the second day," Guthrie said. "Most of my friends that went over with me didn't come home."

"It's surreal, you know. You think about all the people who died for this country ... defending it," his grandson Ronnie Guthrie said. "It's heartwarming."

"Did you ever think you'd have a chance to see this memorial?"

"No. Never think I'd see it. It's better and bigger than I expected," Guthrie said.

"It's fantastic. I never thought it would be anything like this," World War II veteran Joseph Giani said. "People would talk about it, but I ... I'm just ... glad the man upstairs let me get to see it."

"This is making my dad very proud and I'm not going to lie, I got a little choked up today a couple times. Especially some of the young kids that have come up to him to say thank you. It's absolutely amazing," his son Paul Giani said. "Him and his brother both fought in the war and all he ever did was want to see that memorial before he died."

"I was 18 years old when I came in," Joseph Giani said. "I have two grandsons who are eligible to be drafted right now. I just hope never, never do we have to go to war again."

The visit to the World War II Memorial was extra special for World War II veteran Ernest Purcell. He was celebrating his 93rd birthday that same day.

While there, the veterans got to visit historic monuments and memorials, including the World War Two Memorial, the Vietnam Memorial and the Korean War Memorial.

Some veterans were overcome with emotion upon seeing the memorials. One World War Two veteran said he never thought he would see anything like it. A Korean War veteran added, "It looks like I could be there," among the statues wandering in the field.

When the vets returned, they were welcomed by hundreds of people who gathered at the airport with flags and a swing band, playing patriotic music.

Phillip Worley, a Vietnam veteran, said, "This couldn't have been a better day until the end, and it even got better."

Another Vietnam veteran, Darryl Stewart, said that when he "came home in 71, even the taxi driver didn't want to give us a ride. This makes up for that and then some."

On the plane ride home, each veteran was given an envelope full of letters as a surprise. The letters were written by children, grandchildren, and more, thanking them for their service, saying they are proud of everything they've done.