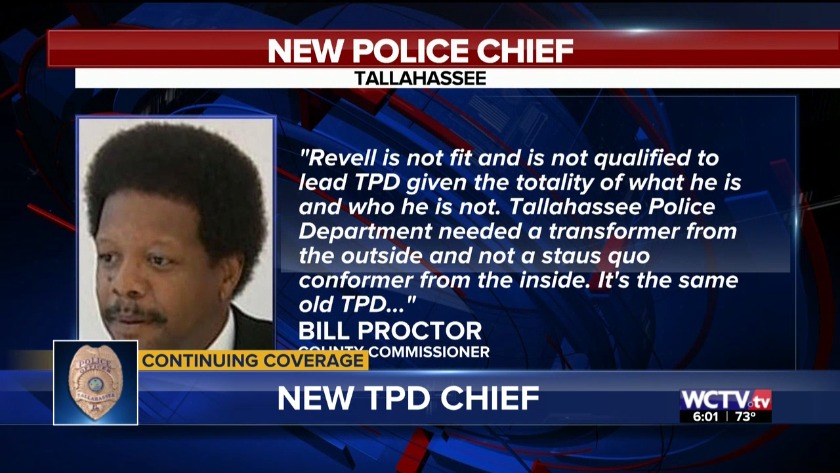 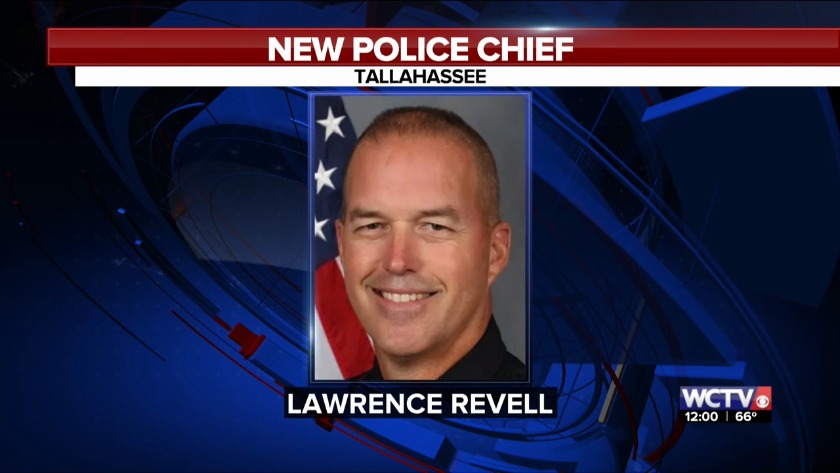 Major Lawrence Revell works in TPD's Criminal Investigative division; he's been at the department since 1992. (Image via TPD)

The months long search came to an end with resounding cheers of affirmation for the new chief, as he outlined his agenda. Three things stood out in his proposed plans. First, he wants to focus on community policing. Second, he wants to implement positive changes within the department and lastly wants to increase collaboration with other local agencies.

Not everyone agrees with the hire, however, as County Commissioner Bill Proctor spoke out against it. In a statement sent to WCTV, Proctor says:

"Revell is not fit and is not qualified to lead TPD given the totality of what he is and who he is not. Tallahassee Police Department need a transformer from the outside and not a status quo conformer from the inside. It's the same old TPD..."

Stanley Sims, Tallahassee resident and activist, says he's okay with the choice, but is uneasy about the process.

"That process victimize two minority law inforcement officers," said Sims. "And it sends a message that Tallahassee cannot recruit nor maintain upper management minorities and that's a discussion we need to have."

Revell said that he knows of the disparity and will make changes quickly. He knows upper management needs to be more diverse and though he won't tell us his specific plans yet, he says he promises movement and change will come.

For those worried about his relationship with the Southside of Tallahassee due to the shooting in 1996, City Manager Reese Goad says he will fit in just fine. "He's a man of faith, hes a man of high character, he's a man that grew up on our southside," said Goad. "(Someone) that attended Rickards High School, that knows our community and he has relationships throughout our community that he can take advantage of immediately."

The contract is signed and everything is done according to both Chief Revell and City Manager Goad. All that is left is for the Revell to get ready to implement his plans when he officially starts his new position as the new Chief of the Tallahassee Police Department January 4th.

WCTV obtained the city's contract that Revell signed Christmas Eve.
The deal calls for an initial term of five years and a base pay of $180,000. Contract renewals will be available every two years.

The contract explains the police chief will "serve at the pleasure of the City Manager," and he can be terminated with sixty days notice.

Revell's offer letter indicated he would have discretion over his department's organizational structure according to discussions with the City Manager.

City Manager Reese Goad made the announcement in a press conference at TPD's headquarters. Revell will start the job on January 4.

Watch the press conference below:

“As Chief, Revell’s vast community knowledge and strong relationships with both law enforcement and civic partners will enable him to affect positive change straightaway for Tallahassee,” Goad said. “His dedication to our community throughout his life and professional career has been unwavering.”

Revell served as a Major in TPD's Criminal Investigations Bureau. He also served as Major for the High Risk Offenders Bureau, the Special Response Team and Captain for Research and Development. Revell has been a member of TPD since 1992. During his career at TPD, Revell earned two Medals of Bravery, one in 2007 and the other in 1997, as well as Meritorious Service Awards in 2008 and 1996.

Revell grew up in Tallahassee and attended Rickards High School and FAMU and FSU.

WCTV spoke to Revell on November 18 about his goals for the department if he were to be selected chief. He said his number one goal is to restore the trust between TPD and the community.

He also said he would address staffing issues at TPD.

Finally, he said he would lead the city through community-led policing.

"I have full confidence in Chief Revell to lead TPD into the future,” Dailey said. “I also want to thank City Manager Reese Goad for establishing the most transparent process for selecting a police chief this City has ever seen. His selection of Chief Revell honors the community-based process and demonstrates his continued commitment to providing TPD with the personnel and resources necessary to meet the challenges before us.”

When Revell was initially announced as a finalist for the top cop job in early November, County Commissioner Bill Proctor held a rally to speak out against him. Proctor said city leaders never asked Revell about his involvement in the fatal shooting of a suspect in 1996.

Revell shot and killed a black teenager during an arrest attempt at the Joe Louis Street housing complex in 1996. Police say the teen attempted to run over Revell by driving straight towards him and ignoring commands to stop.

An internal affairs review and a grand jury cleared Revell of any wrongdoing, finding the use of force justified.

Following Proctor's comments, Revell held a press conference and said the day of the shooting was the worst of his career, but an important lesson.

"This also makes me uniquely qualified to understand the kind of trauma these events have on our officers and our community," Revell said in the press conference.

Two religious leaders in Tallahassee threw their support behind Revell in late November.

Experts told WCTV that an officer-involved shooting should not disqualify a candidate from being a police chief; they said it is an unfortunate, but sometimes necessary part of the job.

"Chief Revell is extremely capable, competent and has the experience and energy to lead TPD and inspire the citizens to join the fight to reduce gun violence and ensure the safety of all of the citizens in Tallahassee," Holmes said. "Let's all come together and support and pray for our new chief."

"l look forward to working with Chief Lawrence Revell in our joint efforts to ensure the safety of our community, while building lasting law enforcement collaborations,” McNeil said.

Even Revell's former ninth grade teacher was at the press conference.

“I’ve watched Lawrence grow up and overcome every challenge placed in front of him," Cheryl Collier-Brown, retired Leon County educator, said. "I’m proud of him and excited for Tallahassee.”

Florida Department of Law Enforcement Commissioner Rick Swearingen and Police Benevolent Association President Richard Murphy both said Revell is the right man for the job and has their support.

The Florida Police Chief’s Association started its nationwide search for Tallahassee's new police chief in August 2019. After 52 resumes were accepted, FPCA recommended a list of 20 candidates for the Community Partners Committee. The committee, which was made of community, faith, business and law enforcement leaders, twice narrowed the list down during its public meetings and unanimously voted to advance three finalists for consideration.

As Chief of Police, Revell will direct a staff of about 535 employees and be responsible for a budget around $60 million.

3 adults, 3 children killed in crash on I-95 in South Georgia
Related Documents