TALLAHASSEE, Fla. (WCTV) – Congratulations to the Class of 2016! Graduations across Leon County wrapped up this weekend, and students at Leon and Rickards High School crossed the stage, preparing to head off to college or into the real world.

One of those graduates is a remarkable young man we've come to know and love here at WCTV – Rickards graduate BJ Johnson.

BJ's story of triumph over adversity truly touched the community. A father in prison, a mother addicted to drugs, his grandmother passing away which left him to live in a car, never derailed him from pursuing his dream to graduate and go on to play college baseball.

Full of self-pride, accomplishment and celebration, the smile on BJ's face says it all.

Graduating from high school holds a special place in his heart. He made a promise at his grandmother's funeral that he would reach the milestone.

With the support from the community, there's one thing BJ has treasured the most.

“If you just look back and you just think about where you have been and where you came from, I mean it's just amazing,” BJ says. “Look where I’m at now and look where I’m going."

BJ is the second of six siblings to graduate from high school.

BJ's graduation party was also held over the weekend at Celebration Baptist Church. He received over $2,100 for his college fund, had a suit donated for his party, and his mother was also in attendance.

His mother, who battled drug addiction throughout his childhood, says he is an inspiration.

BJ will attend Iowa Lakes Community College in the fall.

[VIDEO]: Rickards High School senior BJ Johnson got a big surprise on air today and there wasn't a dry eye in the house. Check out who surprised him in the video clip above!

A photo album from BJ's visit to WCTV is attached at the bottom of this article.

A fund has been set up by the family of Rickards' baseball coach Brian Kelley to help cover expenses for BJ during his transition to college. If you'd like to make a donation, head to: https://www.youcaring.com/bj-johnson-571447#.Vz57aAilmld.twitter

TALLAHASSEE, Fla. -- On Monday, we introduced you to Rickards High School senior BJ Johnson. He'd been sleeping on couches and living in his grandmother's car since she passed away. He was homeless for three months, but very few people knew it.

The story of BJ Johnson is uplifting. A father in prison, a mother addicted to drugs, his grandmother passing away which led him to live in a car, all of which never derailed him from pursuing his dream to play college baseball.

BJ will attend Iowa Lakes Community College in the fall.

But who has been taking care of BJ since people found out he was living in his grandmother’s car? Turns out, Rickards High is more than just a high school. It’s a community.

BJ’s life -- which was upside down for most of 2015 -- got an uplifting change when school got out for winter break. Still keeping his story hidden from many, BJ got invited to spend the winter break at assistant coach James Keister's house. That two week break turned in to a several month stay.

Keister said, “We tried to give a good Christmas. Not just presents but showed the kid love. The two weeks was up, me and my wife got together, sat down and we didn’t want BJ to leave. So we asked him if he’d like to continue to stay and be a part of the family, and BJ, who BJ is, he laughed and said, ‘I thought I was already a part of the family.’”

BJ says, “I knew I was always a part of the family but, I didn’t know you wanted to… I didn’t know I had that big of an effect on you.”

Thompson says, “We were saying, ‘how did you become my child?’ Because I call him my child. I just kind of adopted him because I was so impressed with what was going on, what he was doing, his personality, and how far he had come.”

It hasn't just been these two though. Other teachers, faculty and students have all chipped in this last semester for BJ. Whether it’s supplying food, or a place to stay, Rickards High is BJ's home.

Now one of BJ's goals in life is to be a sportscaster. Thursday, BJ will be joining the WCTV team to co-anchor sports.

TALLAHASSEE, Fla. -- When a batter steps into the box, it's him versus the pitcher. For one Rickards High School baseball player, his whole life he has been at bat against every curve someone could throw at him.

“No one really knew the whole story of what I really went through as a homeless student.”

For Rickards senior BJ Johnson, his story is heroic, but what you wouldn't guess is that for most of his 19-year-old life, it's been tragic.

"I didn't really want to share the story because I didn't want people to worry about me. I wanted to let everyone know that I'm happy and I could do it and that I was going to make it," BJ told us.

When BJ was only 3 years old, his father was sentenced to life in prison. His mother had an ongoing drug problem which forced him to live with his grandmother.

BJ's baseball coach, Brian Kelley, says, "Well with BJ, to be honest, he really didn't tell anybody. We all knew how difficult it was when his grandma died."

"She introduced me to baseball actually. Introduced all my siblings-- brothers and sisters-- to baseball. If it wasn't for her, I don't know if baseball would be my true love that it is today," BJ says.

His smile is contagious. His attitude, always positive. Despite everything that has happened to him, friends say he's never complained once or asked for help along the way.

"I just thank God for the car and having somewhere to sleep. If it had not been for the car, I don't know where I'd be today," BJ says.

Next up for BJ is being on his own once again. Johnson is going to attend Iowa Lakes Community College on a baseball scholarship.

Who would have guessed that at 19 years old the easiest curve ball that ever came BJ's way would be the one that you actually need a bat to hit? Because all his life, every curve that's been thrown at him, he's hit out of the park.

Use the arrows to click through the photo album below: 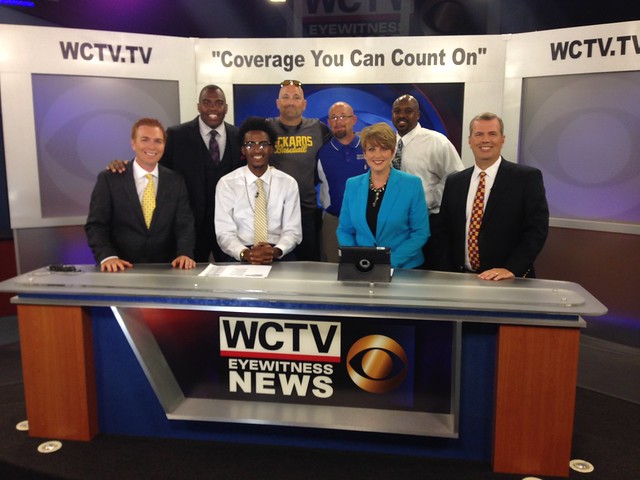